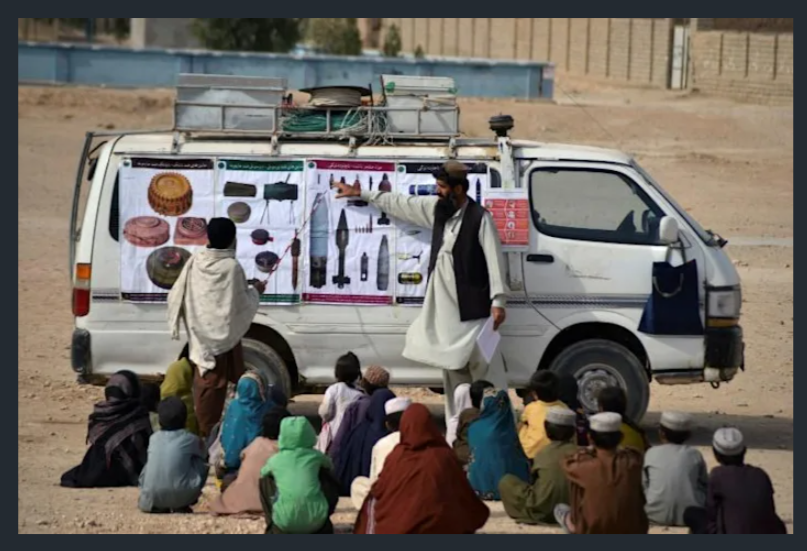 Weeks after the Taliban took over Afghanistan, families who fled the fighting in one southern village returned home to find something strange: the cricket ground had been circled in rocks painted red and white.

White, it turned out, meant it was safe for children to play. But red signalled buried landmines and other ordnance — the explosive remnants of war that have killed or maimed tens of thousands of Afghans over the past four decades.

The village of Nad-e-Ali in Helmand province became a front line in the final days of the war between the Taliban and Western-backed government forces in Kabul.

It was besieged for two months until the Islamists took control of the country in mid-August.

When its residents returned in September they found the village school riddled with gunfire, its roof blackened by smoke, and the children’s swings reduced to just a metal frame.

They also found that the area had been “totally mined” in the fighting, according to Juma Khan, the local coordinator for the HALO Trust, the main mine-clearing NGO operating in Afghanistan.

Newly laid mines and other booby traps were buried beneath doors of buildings and beside windows.

“The rooms inside had mines and there were mines on the main street,” Khan told AFP during a visit to Nad-e-Ali this month.

About 41,000 Afghan civilians have been killed or wounded by landmines and unexploded ordnance since 1988, according to the United Nations Mine Action Service (UNMAS).

More than two-thirds of the victims were children, many of whom spotted the deadly devices while playing and picked them up.

The HALO (Hazardous Area Life-Support Organization) Trust was founded in 1988 specifically to tackle ordnance left behind during the Soviet occupation of the country.

The country was so badly contaminated, however, that the clearance work never stopped — even after an international treaty banning the use of landmines was signed in 1997, with Afghanistan ratifying the convention in 2002.

More than 30 years later, in the battles leading up to the Taliban’s return to power, mines and improvised explosive devices were again laid and left behind — this time by both the Islamists and their now ousted adversaries.

HALO — one of the favourite charities of Princess Diana — struck an agreement with the new Taliban authorities in September to have its more than 2,500 Afghan employees return to work.

In Nad-e-Ali, Taliban fighters are now guiding HALO’s deminers to find the deadly traps they themselves set up.

Because they live in the village and do not want to be blamed for civilian deaths, Taliban fighters “used to take them out with their own hands, but we stopped them to avoid any further detonations”, said Khan.

But even as demining efforts persist, explosions have already caused casualties among villagers.

Two months ago the wife of a village teacher lost both her legs when an explosive device detonated the moment she opened the door of her house.

“This incident was very painful. I saw it happen with my own eyes,” said the teacher, Bismillah.

“I saw my children screaming and crying… I’m alone and the stress is too much, too much.”

Since then, the village and its school have been classified as a “high priority” demining zone.

It was HALO that set up the red and white rocks to mark out safe corridors for their 10 teams of eight deminers as they carefully inspect the ground using metal detectors.

“When it detects metal, battery or anything it rings an alarm. Then we mark the area, and start to dig very carefully,” said supervisor Bahramudin Ahmadi.

“As soon as we have a visual of the mine we inform the demining team and we inform the local security, as they have to give the permission to clear the zone and after that we detonate it.”

Over the past three months, 102 explosive devices have been defused in the region, including 25 in the village itself — but that is believed to be just a fraction of what remains buried in the ground and hidden inside some houses.

For HALO, it is a race against time in post-war Afghanistan to “decontaminate” one of the most heavily mined countries in the world.

The priority is to protect children. In Nad-e-Ali, HALO workers were blunt about the dangers.

“Please understand, if you lose a leg you know how much it will cost your parents, and if you die how much sorrow,” Nazifullah, a HALO programme manager, told a group of children sitting cross-legged on the ground.

“What do you do if you see this?” he asks them, pointing at a picture of a landmine.

“I will immediately tell my family, my brother or my imam at the mosque,” said eight-year-old Nazia.

“I am afraid, but I know that when I see white rocks we can play and when it’s red we can’t play.”

Amir pulls out of T10 league over Coronavirus

Russia to invite Taliban to international talks in Moscow