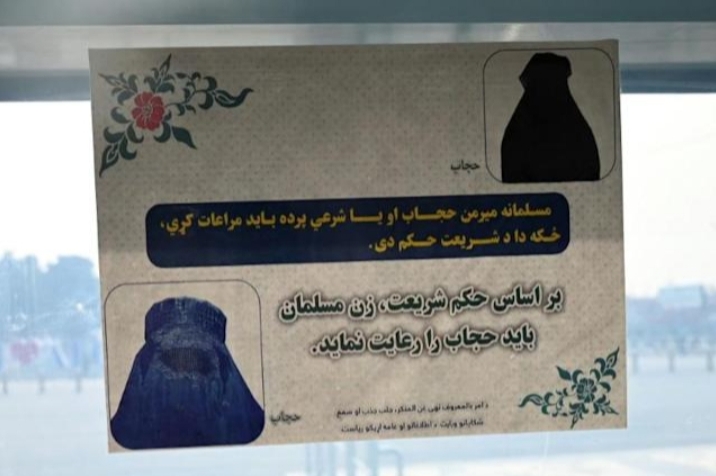 The Taliban have ordered airlines in Afghanistan to stop women from flying unless accompanied by a male relative, in the latest crackdown on basic human rights by the country’s new rulers since seizing power.

Over the weekend, they also decreed that men and women could not visit parks in the capital on the same days.

After returning to power in August the Taliban promised a softer version of the harsh rule that characterised their first stint in power, from 1996 to 2001, but restrictions have crept back — often implemented regionally at the whim of local officials.

Women are increasingly being shut out of public life — barred from high schools and most government jobs, and ordered to dress according to the Taliban’s strict interpretation of the Koran.

In their latest crackdown, the Taliban ordered Afghanistan’s Ariana Afghan Airlines and Kam Air to stop women from boarding flights unless they were escorted by a “mahram”, or adult male relative.

The decision was taken after a meeting on Thursday between representatives of the Taliban, the two airlines, and Kabul airport immigration authorities, aviation officials told PMC.

“No women are allowed to fly on any domestic or international flights without a male relative,” said a letter by a senior Ariana official to his staff, a copy of which was obtained by PMC.

A spokesman for the Taliban’s religious enforcers, the Ministry for the Promotion of Virtue and Prevention of Vice, denied ordering the flight ban, but two travel agents told PMC they had stopped issuing tickets to solo women travellers.

The edict was not expected to affect foreigners, although aviation officials reported that an Afghan woman with a US passport was prevented from flying last week.

“Some women who were travelling without a male relative were not allowed to board a Kam Air flight from Kabul to Islamabad on Friday,” a passenger on the flight told PMC.

The flight ban came as the vice ministry ordered that men and women should not visit parks in Kabul on the same days.

Women are now permitted to visit parks only on Sundays, Mondays and Tuesdays, while the remaining days are reserved for men, a ministry notification said.

“It is not the Islamic Emirate’s order but our God’s order that men and women who are strangers to each other should not gather at one place,” Mohammad Yahya Aref, an official at the vice ministry, told PMC.

The new restriction on women follows Wednesday’s shutdown of all girls’ secondary schools just hours after they were allowed to reopen for the first time since August.

Tens of thousands of girls had flocked back to class, but officials ordered them home just hours into the day, triggering international outrage.

Taliban sources said that the decision was taken after a closed-door meeting of the movement’s leaders last week in Kandahar, the de facto power centre of the group.

Several Afghan women activists have warned of nationwide protests if the schools were not open within a week.

“We see the screws tightening on women and girls every day now,” she said.

“They have abandoned — at least for now — any effort to reach an accommodation with the international community, and that leaves them with nothing to lose.”

The Taliban appear to have also set their sights on local media networks, which flourished under the previous US-backed regimes.

The raids come a day after the authorities ordered the BBC’s television partners in Afghanistan to stop broadcasting its news bulletins.

“Since the foreign TV channels are broadcast from abroad, the Islamic Emirate has no access to control their contents, especially when it comes to journalists’ uniforms and dresses,” government spokesman Inamullah Samangani told PMC.

US cancels talks with Taliban over U-turn on girls’ education