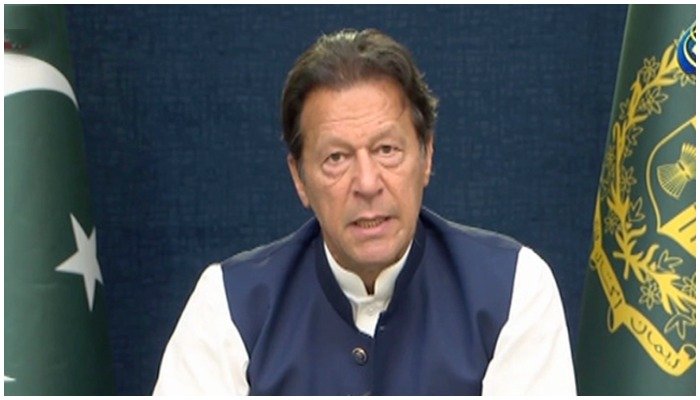 ISLAMABAD: In a surprise move, Prime Minister Imran Khan Sunday said that he has advised President Arif Alvi to dissolve all the assemblies.

His brief public address was telecast shortly after a crucial National Assembly session that was set to vote on the no-confidence motion against him was abruptly adjourned as the deputy speaker deemed the no-trust vote “unconstitutional”. The premier skipped the NA session.

Pleased with the NA deputy speaker’s ruling, the premier congratulated the nation over the development.

“The NA speaker has rejected the move intended at changing the regime and I congratulate the entire nation on it.”

“Pakistan came into existence on 27th Ramzan, and this nation will not let such a conspiracy get successful.”

He said that after the decision the NA deputy speaker made using his constitutional right, he [PM Khan] has suggested President Arif Alvi to dissolve the assemblies.

“In a democratic society, the democrats go to the people, elections are held and the people decide who they want to rule.”

The prime minister said that all the money spent on buying loyalties will get wasted. He told the people who have taken this money that they still have the chance to spend it on charity.

He told the nation to prepare for elections.

“No foreign power or any corrupt elements, but only you have to decide for this country.”

He said that as soon as the president receives his suggestion, the assemblies will be dissolved and the process of a caretaker government will start.