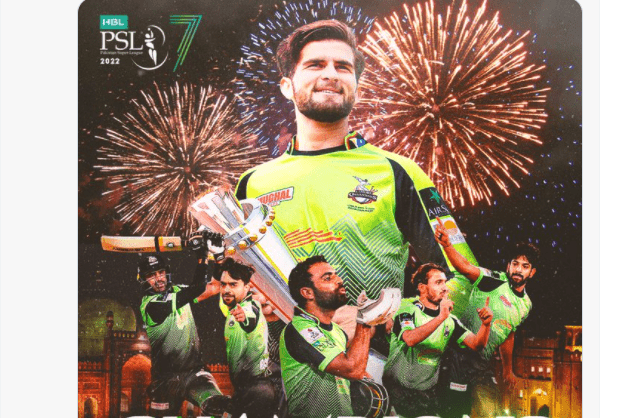 Lahore Qalandars overcame the hurt and disappointment spread over six HBL Pakistan Super League seasons by lifting the glittering HBL PSL 7 trophy in front of 27, 000 adoring Lahore spectators (houseful) at the Gaddafi Stadium on Sunday night as Multan Sultans’ dream of becoming the first team to successfully defend an HBL PSL title was shattered with a 42-run defeat.

Qalandars – losing finalists in HBL PSL 5, finished last in the first four seasons and fifth in HBL PSL 6 but chose the perfect setting to not only lift the trophy but also to pocket PKR 80 million while providing incredible joy and memories of a lifetime to their fans in their own backyard.

Batting second, Sultans were never quite in the hunt in their 181-run chase once their prolific opening partnership of Mohammad Rizwan (14) and Shan Masood (19) was dismantled.

Mohammad Hafeez (player of the match) who produced his best innings with the bat of the season in the all-important final made a telling contribution with the ball by bowling Rizwan before Fakhar Zaman produced a sensational bit of fielding to run out Shan after the opener was stranded in the middle of the pitch following a misunderstanding with his partner Aamer Azmat.

Sultans kept losing wickets at regular intervals against some high octane Qalandars bowling. Tim David’s dismissal for 27 courtesy another sensational catch by Fakhar on the first ball of the 17th over bowled by Qalandars talismanic captain Shaheen Shah Afridi finished the game for Sultans with Shaheen bowling David Willey (0) on the fourth ball of the same over with an unplayable yorker.

Khushdil (32) was dismissed by Haris Rauf in the next over while Shaheen castled Rumman Raees (6), Imran Tahir’s (10) dismissal in the final over to David Weise sparked celebrations in the Qalandars dug out and the entire stadium.

Meanwhile Qalandars win means all six HBL PSL franchises have now lifted the trophy at least once, Islamabad United are the only side to win two titles (2016 and 2018).

Earlier, Qalandars’ never-say-die attitude was at the forefront for the umpteenth time in HBL PSL 7 as after a disastrous start (elected to bat at the toss), the home side sent the crowd into sheer jubilation with a magnificent end to their innings as 77 runs were added off the last 30 balls.

Asif Afridi gave Sultans a brilliant start to the final with a two-wicket burst while Willey took one wicket to stun the packed crowd. Qalandars were left reeling at 25 for three in 4.2 overs. Asif dismissed Fakhar (3) – the leading run-getter of the HBL PSL 7 (588 runs) and Abdullah Shafique (14).

Willey accounted for Zeeshan Ashraf (7) who was included in the Qalandars eleven for the final. The Qalandars veteran Hafeez revived the innings in a 54-run fourth-wicket alliance with Kamran Ghulam (15).

Hafeez upped the scoring rate with a series of boundaries and chose the perfect timing to post his first fifty off the season. The right-hander was eventually dismissed for 69 off 46 (nine fours and one six).

Hafeez’s departure with 16 balls remaining did not help Sultans much as the Eliminator 2 player-of-the-match Wiese perfectly mirrored his batting contribution on Friday (28 off eight, one four, three sixes).

Harry Brook was another star performer as the English youngster sizzled with 41 unbeaten runs off 22 (two fours, three sixes). Brook and Wiese added 43 off 16, Brook had earlier added 58 off 33 with Hafeez.

Player of the match Mohammad Hafeez:

“I want to thank everyone who came to witness the game, it was an amazing atmosphere. My management backed me and I think this was a great time to perform. It is all about absorbing some pressure, the partnership between me and Harry Brook really helped. For the last seven years Lahore had worked so hard to win this trophy. Shaheen is a superstar to me and to the whole nation he gave us all real backing throughout the event.