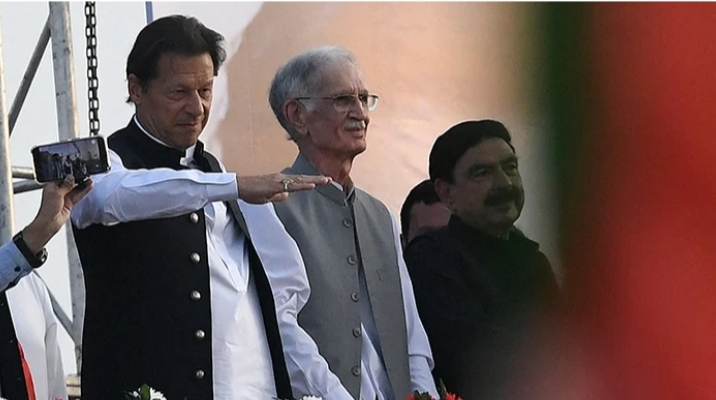 ISLAMABAD: Prime Minister Imran Khan has “strictly” directed PTI’s members of the National Assembly (MNAs) to either abstain from voting or not attend the session when the no-confidence motion against him is on the agenda.

PM Imran Khan told the MNAs that no PTI member should attend or make themselves available on the time and day of the voting on the resolution of no-confidence.

The prime minister said that all members are “required to adhere to his directions in true letter and spirit” and should keep in mind the “intention behind the provision of Article 63(A) of the Constitution of Pakistan.”

PM Imran Khan warned the party lawmakers that “every or any” violation of the directions would be treated as an “express defection” in terms of Article 63(A).

The letter also mentioned that designated PTI members would speak during the debate on the no-confidence motion.

The letter comes after the Opposition lawmakers in the NA moved a no-confidence motion against embattled PM Imran Khan’s government Monday, as he tries to shore up a wavering coalition over accusations of mismanagement and foreign policy bungles.

The lower house will start debating the motion on Thursday and PM Imran Khan has tried to steady the ship ahead of a likely no-confidence vote next week.

The prime minister is facing the biggest challenge to his rule since being elected in 2018, with opponents accusing him of dragging the country into deeper economic turmoil.

No prime minister in Pakistan’s history has ever been ousted through a no-confidence motion, and PM Imran Khan is the third premier to face the challenge.

As the political situation intensifies, the prime minister had Sunday revealed that “foreign elements” were involved in the attempts to topple his government and said: “Some of our own people” are being used in this regard. But the Opposition has turned down such claims.

Addressing a charged PDM rally in Islamabad yesterday, PML-N Vice President Maryam Nawaz had said no foreign powers were working against the incumbent government as the prime minister himself was the “biggest threat” to the country.

Bridgerton season 2 review: So different they might as well have renamed the entire show