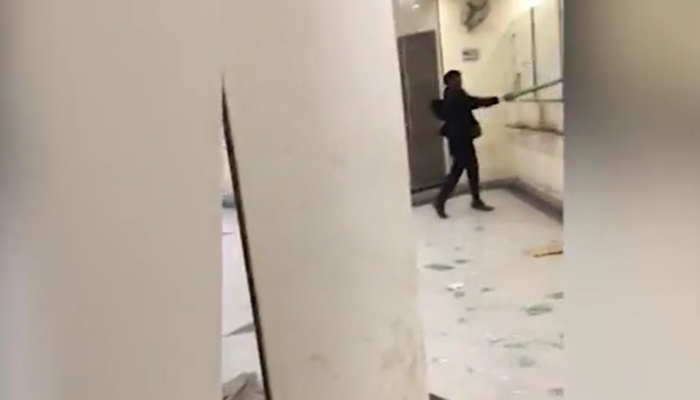 LAHORE: A furious lawyer, angry at receiving a certified copy of a case with delay, smashed the counter class at the newly built office of the Lahore High Court (LHC) on Wednesday.

In the video, the lawyer can be seen angrily shouting a the copy office with a large stick in his hand. He shouts and barks orders at others in the room, telling them to get out of his way.

A guard can be seen pleading with the lawyer, but to no avail.

The lawyer, identified as Majid Jehangir, then proceeds to smash the counter glass in anger.

According to the LHC spokesperson, the lawyer has been arrested and a case has been registered against him under the Anti-terrorism Act. The bar council also strongly condemned the incident and suspended the license of the lawyer.

DIG Operations Sohail Chaudhry said that legal action would be taken against the accused, “no matter how influential someone is, he is not above the law”.

He added that the security of courts was the first priority in which no negligence would be tolerated.

Jahangir was later arrested by police for creating the ruckus, as pictures of the lawyer from behind bars started trending on social media.