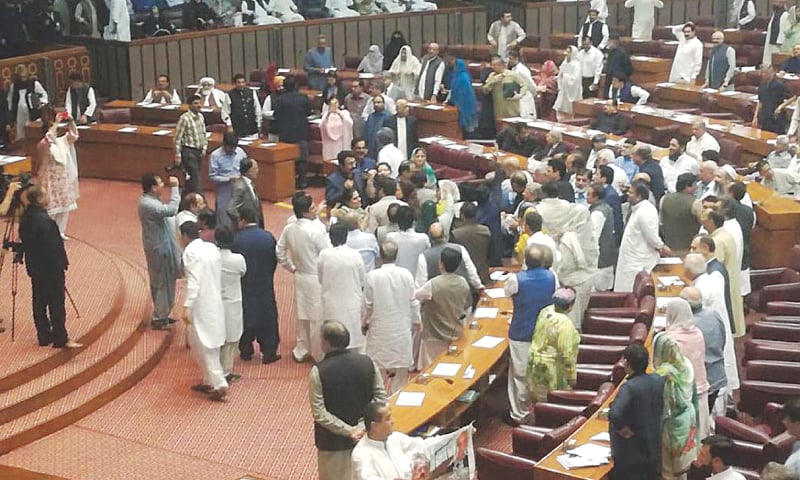 PTI MNA Maleeha Bokhari faced an injury when lawmakers came to a dispute with each other during a National Assembly session on Tuesday.

In a recent video shared by State Minister for Information Farrukh Habib, the PTI lawmaker Maleeha can be seen getting treatment after injuring her eye.

Habib exclaimed that she was hit by a book that was thrown at her by a PML-N MNA during the session when members were abusing each other.

The minister also said that the PML-N members have no respect for their female colleagues.

What happened in NA?

The NA proceedings witnessed shameful scenes when the ministers and parliamentarians were seen creating chaos, using filthy language, whistling, and attacking each other with budget books during the speech of the Opposition Leader Shahbaz Sharif on the federal budget.

During the uproar, one of the members from the treasury benches threw a book towards Shahbaz, which fell on the desk in front of him. The members from two sides came close to a physical brawl in front of the NA Speaker’s chair, but he could do nothing except for making requests and suspending proceedings time and again.

The security staff of the NA also made a protective circle around the opposition leader and pushed back the government members, who were trying to move towards him.

The opposition members also encircled Shehbaz Sharif to prevent him from any attack.

In the meantime, one of the security staffers, Asif Kiani was slightly injured when a book hit him close to his eye.

The members from two sides were also seen hitting each other with books and using abusive language while some government members were seen standing on their seats, raising slogans and throwing books.

A video showing Ali Nawaz Awan of the PTI abusing an opponent also went viral on social media. However, the PTI member said it was Shaikh Rohail Asghar of the PMLN who abused him first.

Speaker Asad Qaisar also took notice of the hooliganism in the National Assembly.

“The non-parliamentary attitude adopted by members from the government and the opposition benches and objectionable language used by them is condemnable and disappointing,” the speaker said.

He said following an investigation, the members who used objectionable language would not be allowed to enter the House on Wednesday.

Gladiators eye victory against Sultans to stay alive in PSL 2021